18 holes – Championship Course (James Braid, Old Tom Morris, Archie Simpson, Ben Sayers) Along the shore of the firth, to the northeast of Inverness, visiting golfers and some keen historians will find the Nairn Golf Club.  In 2015, the Championship Course was ranked as #11 of the top 100 courses in Scotland by Golf World Magazine.  Amateur golf has been showcased at Nairn for years and the club most recently hosted the 2012 Walker Cup and 1999 Curtis Cup.  With views of the sea from every hole, golfers may find it difficult to keep your eyes on your game. 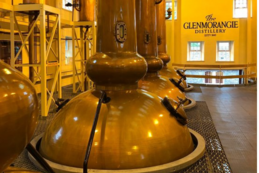 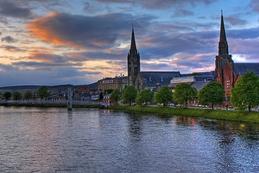 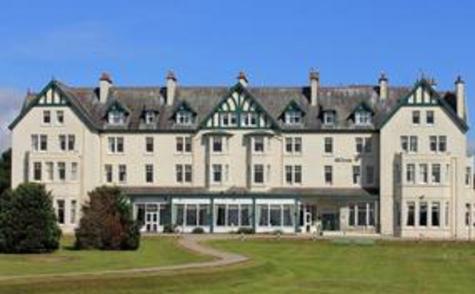 Let us create a custom golf package tailored for your group!

Thank you for contacting us! A response from our office will follow within 24 hours.

Scotland "where the game began."

36 holes - Championship Course 18 holes (Old Tom Morris, Duncan, Grant) – Struie Course 18 holes (Donald Steele) Golf has been played here since 1616.  In 2018 the Championship Course at Royal Dornoch was ranked #2 by Golf Digest’s “World’s 100 Greatest Golf Courses”.  Royal Dornoch is simply one of the finest examples of links golf on the face of the earth and its place in the world rankings of numerous golf authorities and publications is well earned. 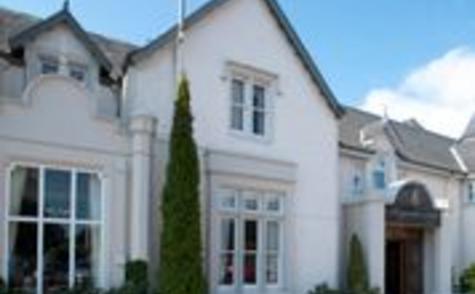 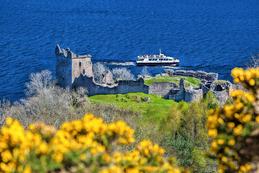 (Inverness, Scotland) Loch Ness is about 6 miles south of Inverness and is home of the storied “Nessie”, the Loch Ness Monster.  The deep water from the lake flows north thru downtown Inverness (River Ness) creating many beautiful riverside walking grounds and sustains steady tourism businesses along the shorelines including boat tours, exploration of castle ruins, Fort Augustus, and The Loch Ness Centre and Exhibition.

Just outside of downtown Inverness is the smartly appointed Kinsmills Hotel which features luxurious rooms, impeccable dining options and good old-fashioned Scottish hospitality to all. Your home in the Highlands offers flat screen TV, AC, and free WIFI access. Two beautiful restaurants offer luxurious, dining experiences with some of the top chefs in the Highlands to produce sensational menus using fresh, local and seasonal produce. The Kingsmills Whisky Bar is the place to get the conversation flowing with an extensive range of drinks accompanied by a selection of delicate light bites.

This trip also provides transfers to the golf courses. You won't need it at Royal Dornoch as the hotel is along the 1st fairway and near the club house.  However, a private chauffeur driven bus will transfer your group to all the other courses and to/from the hotels and airport.  This will allow you to sit back and enjoy beautiful scenery found throughout the Scottish Highlands.

The Singleton of Glen Ord Distillery

In Scotland, like many places these days, hotels are taking steps to become more environmentally friendly and “greener”.  You can still expect the same quality and service from a hotel as at home but, keep in mind that hotel rooms in Scotland, on average, are smaller, than what you'd find in the United States.  Here are hotels we have found in the Highlands that have excellent locations for golfers, with easy access to shopping, restaurants and pubs while providing a level of accommodation to suit the needs of anyone.

Scotland has over 500 golf courses and some of the best are located in the Scottish Highlands. This trip will take you there. Many golfers from the US who seek a Scotland golf trip will settle for the standard visit to the obvious destination of St. Andrews which becomes crowded at peak season, but is still a fine destination.  Some who return to Scotland, for  a follow up  visit, seek something more.  Many find it in the less populated, mountainous region to the northwest known as The Highlands.  Centuries ago, the “Highlands” was considered a lawless region occupied by “clans” who posed a threat to the ruling powers.  With a shortage of large plots of farming land, unlicensed whisky distilleries took root. Today, the Highlands are the largest of Scotland's whisky producing regions.  That’s not all you’ll find.  There are also some of the best links golf courses in the world. The Highlands experiences a maritime climate with cool summers and mild winters.  Annually, it is one of the driest locations in Scotland and offers ideal terrain for golf courses.  Almost all the courses you'll play on this itinerary are traditional Links Courses and will include rounds on Royal Dornoch, Nairn, Castle Stuart and more. The trip includes multiple nights in the northernmost town on the itinerary called, Dornoch, and additional nights in the city of Inverness, the “hub” of the Highlands. 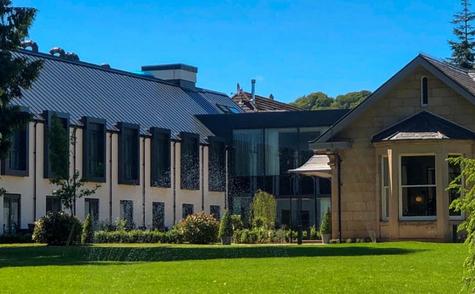 Unlike other cities in Scotland, Inverness might not be a household name to some.  Don’t let that keep you from putting this flourishing gem on your GPS. Inverness is the capital of the Highlands and the main shopping, entertainment and travel center for the North of Scotland. If you believe in sea monsters, you probably have heard of the Loch Ness Monster of Inverness, but you may not know how fantastic the rest of the city is, was, and has become.  With 2 banks on either side of the River Ness, visitors here can stroll along the vibrant sidewalks and streets filled with historical treasures, markets, restaurants & pubs, and natural beauty.  Best of all, for golfers, Inverness is centrally positioned as the ideal hub for accessing the world renowned links courses of the Scottish Highlands.

This stylish Inverness hotel is newly refurbished throughout, blending traditional Highland hospitality with supreme comfort in the finest waterside hotel Inverness has to offer.  The newly refurbished rooms, restaurant, bar and public areas have transformed Mercure Inverness Hotel into one of the most desirable city center Inverness hotels. The Mercure is the perfect hotel for golf groups. Located in the heart of the Old Town a selection of restaurants, shops and nightlife are within an easy walk of the hotel.  All 121 guest bedrooms have HDTV and complimentary high speed WiFi so you can relax at the end of 18 holes. The riverfront location is a welcome oasis at the end of a day touring the vibrant city center, or after a workout in the hotel’s fully-equipped gym.

Inverness - Capitol of the Highlands! 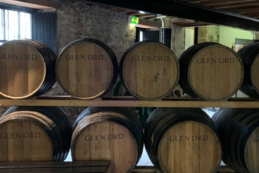 (Muir of Ord, Scotland) In the northern highlands, barley from the Black Isle meets water from the White Burn to make a Scotch of vibrant color.  The site was founded by Thomas Mackenzie in 1838.  Today, visitors can take a guided distillery tour followed by a tutored tasting of the exclusive bottlings from the Singleton of Glen Ord.

In the Scottish Highlands, and nearly all of the UK, golfers walk the courses rather than ride in carts.  Buggies, as they are called in Scotland, are scarce at most courses and require medical certificates for use.  Many courses have none.  For this trip, participants will be expected to walk. Caddies are available for hire at some courses and trolleys (pull carts), will be available at all courses for additional cost. The courses are along the sea and provide excellent views while you play.  Links golf is a vastly different game to itself that every golfer should experience.  Those that do, often develop an addiction.  We recommend these gems while on your Highlands itinerary: 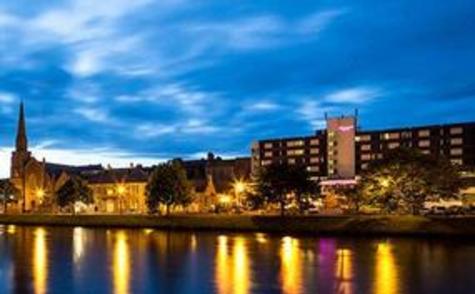 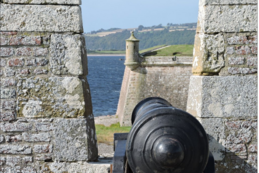 (Inverness, Scotland) After construction was completed in 1746 following the Battle of Culloden, Fort George was used as a base for the army of King George II.   It took 22 years to complete and was used for 250 years by the British Army. Today, visitors can walk along the seaside walls and tour Scotland’s 2nd largest regimental museum on the grounds.  The annual acts of the Highlands Military Tattoo are held at the fort each year. 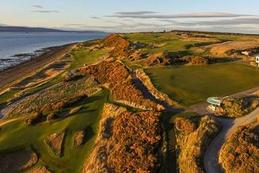 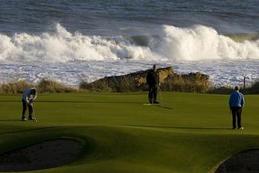 In the heart of the vibrant city of Inverness, lies the oasis of Ness Walk Hotel.  The restoration of the 19th century home combines the best of old and new creating a modern feel amidst the periodic features of the past.  Deluxe king-size beds, layered with exquisite linen, River Ness inspired carpets, and spacious bathrooms, fashioned in light marble greet you after a thrilling day on the links or a stroll along the riverbanks of town.  A riverside wine, whisky and cocktail bar, awaits as does the signature 5 star luxury restaurant, Torrish, serving delicious breakfasts, lunches, dinners, and afternoon teas.

18 holes (James Braid) The breath-taking setting mixed with local charm and the occasional sheep, now enters its 127th year of operation.  Even more stunning than the scenery and well-groomed fairways may be the welcome that golfers receive from neighbors and passersby. Keep an eye open for the seals.  You are only 8 degrees of latitude below the Arctic Circle. 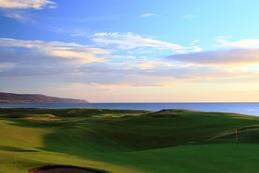 While staying at the Dornoch Hotel guests are treated to unspoiled views across the esteemed Royal Dornoch Golf Club and the pristine beaches of the coastline. Located along the 1st hole of Royal Dornoch Golf Club, the hotel is Dornoch's largest with 105 rooms. All rooms feature en suite facilities as well as a television, hairdryer, telephone, tea and coffee making facilities & free Wi-Fi.  Our guests will stay in Superior Rooms which are more spacious and have been tastefully refurbished. These rooms offer a luxurious Double bed or two Twin beds and views overlooking the course and the sandy beaches of the Dornoch Firth. The hotel boasts two restaurants, alongside a wood-paneled bar and relaxing sun lounge ideal for relaxing after a day on the links or exploring the historic nearby town.

18 holes (James Braid) The 15th Oldest Recorded Club in the World is flanked by the waters of the Moray Firth on 3 sides and the views are stunning.  Be sure to take a peek, if you dare, at the Witches Stone along the 17th fairway.  Once a form of local bragging rights, this stone marks the spot of one of Scotland’s last witch burnings in the early 1700’s!  Only 20 minutes from Inverness.

18 holes (Gil Hanse) A modern icon in Scotland’s rich heritage of links golf, Castle Stuart has become internationally renowned since opening in 2009. Host of the European Tour’s Scottish Open four times in the last 10 years, its acclaimed design complements the spectacular location which is only a 15minute drive from downtown Inverness.  In addition, Castle Stuart’s inclusion in the various lists of the world’s Top 100 golf courses, most notably Golf Magazine (#56) makes it a must play in any Scottish golf itinerary. 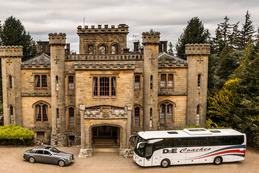 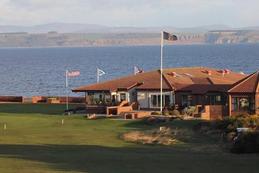 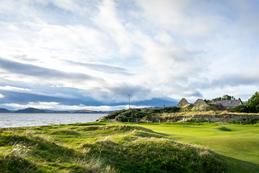 Dornoch (4 Star – European Plan) In Scotland, golfers prefer to walk.  Many feel it’s the only way to play.  Golfers from the world over migrate each summer to the Royal Golf Hotel in Dornoch, Scotland to play at the historical, Royal Dornoch Golf Club.  As a hotel guest, you can do some walking too.  It’s just 50 yards from the steps of the hotel to the first tee of the clubs’ Championship Course. That leaves you with time for a hearty breakfast (included each day) in the hotels Conservatory Restaurant with magnificent views across the golf course to the waters of the Dornoch Firth.  Rooms are furnished with (2) twin beds, (1) queen, or (1) king based on the need and category.  Each room has a private bathroom and includes a flat screen TV, and complimentary WiFi. 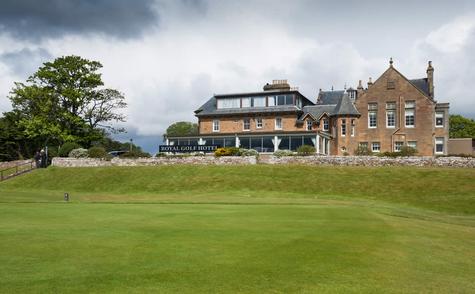